Many of our Baulkham Hills patients think that your face ages because of surface-level effects on your skin and other soft tissues. However, the truth is that significant changes occur in all your tissues, including your bone, to create an aged appearance. This is why the Denture Fountain of Youth®, FOY ® Dentures can work so well as an anti-aging treatment. FOY® Dentures can not only give you the best smile of your life, they can help you look and feel years younger, too.

Your Bones Can Change with Age 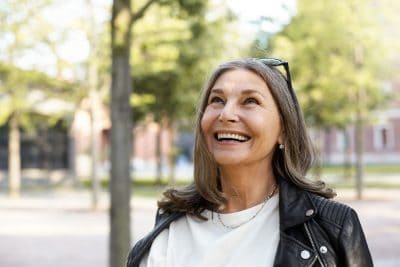 Research published in the Journal of Plastic and Reconstructive Surgery shows that facial aging affects not just your skin and soft tissue but impacts your bones as well. Plastic surgeons reviewed 120 facial CT scans representing 20 men and 20 women in each of three age groups: 20-36, 41-64, and 65 and older. They measured the length, width, and angle of the jaw in each scan.

They found that the angle of the jaw between the horizontal and vertical parts increases with age, causing the jaw to jut forward but at a lower height. The lead researcher noted, “These measurements indicate a significant decline in the jaw’s volume as a person ages and therefore less support of soft tissue of the lower face and neck.”

The bone remodeling is likely due to changing forces on the jaw due to the shrinking and loss of teeth. Over time, all forces will cause the bone to remodel itself (just as it does in orthodontic treatments), and as teeth shrink or are lost, the force pulls differently on the jaw, causing it to change in shape. When your Baulkham Hills dentist replaces lost teeth with dentures that offer adequate height to restore proper forces on the jaw could minimize jaw changes and help you look better not only today but for years in the future.

In addition to changing the angle of your jaw and making your jaw jut out, a shrinking jaw contributes to widespread aging in the face. This happens because of what plastic surgeons describe as the concertina effect. A concertina is the small, accordion-like instrument that you see sailors play in movies and TV shows set in the age of sailing ships.

If you think about how the instrument works, you can understand the principle. When the concertina is stretched out long, the connection between the two handpieces gets smooth. When the sailor brings their hands together, though, folds and creases appear and deepen.

A similar effect happens with the skin on your face. Initially, your bones and muscles hold your skin taut and smooth. However, as the jaw shrinks and collapses–a natural aging process that the loss of natural teeth worsens–the skin folds, creating deep wrinkles in many places, such as around your mouth. In addition, the jaw moving upward speeds the process of sagging in the cheeks. This leads to the cheek fat pads hanging off the sides of your face as jowls.

With less support for the neck tissue, this hangs down more, too. This leads to a double chin or turkey neck.

Facelifts Are Not Enough

A facelift is a procedure that is performed on the soft tissue of the face. Skin, muscles, fat, and other tissues are cut away from their attachments and stretched over the bone in an attempt to create a more youthful appearance. However, this can often result in an unnatural appearance. In part, this is because the directions of stretching and stress may not reflect the natural attachments and draping of skin. It also doesn’t reverse the changes in bone structure that contribute to an aged appearance.

In order to achieve a more youthful and natural appearance, your Baulkham Hills dentist must restore the volume lost in the jaw and attempt to prevent or reverse changes in the jaw angle.

This is one of many reasons that FOY® Dentures are capable of making people look many years younger and may work better than a surgical facelift in some cases. Traditional dentures typically seek only to replace lost teeth. They don’t adequately replace lost bone in the jaw, leaving you with reduced facial volume that contributes to sagging, wrinkles, jowls, double chin, turkey neck, and more common symptoms of facial aging.

The firm fit of FOY® Dentures also helps restore bite force, which encourages the retention of jaw muscles. Jaw muscles are the largest in the head, so if they shrink, it leads to even more lost volume in the face.

Rejuvenate Your Smile and Your Face in Baulkham Hills

Have you lost teeth? Are you looking for a denture that doesn’t just restore your smile but also restores your face’s youthful proportions? If so, then let My Hills Dentist help. Located in the Baulkham Hills, we offer FOY ® Dentures as well as other rejuvenating dental treatments.

To learn how they can help you, please call (02) 9686 7375 to schedule an appointment with a cosmetic dentist at My Hills Dentist in Baulkham Hills today.