Why Your Snoring Gets Worse with Age

Home/Why Your Snoring Gets Worse with Age

Consuming More as We Get Older 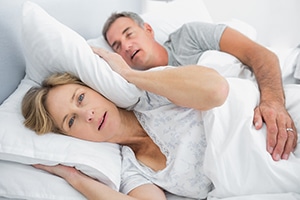 It’s expected that many of the things you used to enjoy are no longer so interesting to you as they used to be. And other things that weren’t as interesting in the past can become more so in the future.

One of the things that people tend to indulge in more with age is alcohol. People tend to drink more alcohol as they get older (though younger people are more likely to be binge drinkers). This can have a significant impact on snoring because alcohol relaxes the muscles of the throat as well as those in the rest of the body, which can lead to sagging and narrowing of the airway. This contributes to turbulent airflow, which, as we know, is snoring.

Cigarette consumption also tends to increase with age — as long as people remain smokers. Smoking irritates the tissue of the airway, causing it to swell, which narrows it, again, and leads to sleep apnea.

We Slow Down With Age

As we age, we also tend to get less exercise. This can contribute to snoring in a couple of ways. First, we’re more likely to gain weight, and with less exercise, the muscles in the throat lose their tone, which means they are less able to hold the airway open.

Most of the time, it’s men who are the snorers, and their wives complain about snoring, but this reverses about at the age of menopause. When women’s sex hormone levels begin to drop, their tendency to snore goes up. After menopause, a woman’s risk of snoring is about the same as a man’s.

Combat the Effects of Aging

You might respond to the effects of aging by trying to change your lifestyle and combat snoring that way. Unfortunately, it’s not so easy, since snoring and sleep apnea can make it much harder to change your lifestyle. It’s harder to be strong and resist cravings when you are exhausted from snoring. In addition, snoring and sleep apnea can interfere with your body’s metabolism, making it much harder to lose weight.

If you are really looking to turn back the clock, you should consider trying snoring or sleep apnea treatment. To learn how you can benefit from these treatments, please call (02) 9686 7375 for an appointment with a sleep dentist at My Hills Dentist in Baulkham Hills.