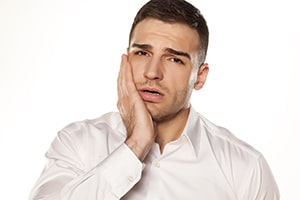 It was the first time anyone in the world had ever received a 3D printed titanium jaw joint. A month ago, a 32-year-old from Melbourne who had suffered an injury to the jaw as a child had his jaw joint replaced. Now we know this is just the first of many such applications to come.

The first man to receive the 3D printed temporomandibular joint had suffered a jaw injury as a child that damaged one of his jaw joints, causing irregular development of the jaw joint. He was missing the left condyle, which is the part of the jaw that inserts into the socket in the temporal bone of the skull.

Without a functional left jaw, his face was skewed to one side. He suffered significant jaw pain that was making it increasingly difficult to move his jaw or chew.

The pioneering technology was not without its hiccoughs, though, as it took 30 versions of the jaw joint to get the fit precisely right. Placing the jaw joint wasn’t easy, either — it took a 5-hour surgery.

Why 3D Printing Is Good for the Temporomandibular Joint

The firm that did the printing, 3D Medical, has announced that they have several more contracts for 3D printed jaw joints. There are 6 jaw joints that have been ordered for use in five patients.

None of the upcoming cases are as drastic as the first one. They are all going to be used in patients who have osteoarthritis of the temporomandibular joint. Arthritis commonly attacks the jaw joint, leading to pain and even disability.

A spokesperson at 3D Medical noted that 3D printing is not right for every prosthesis, but when it comes to the temporomandibular joint, 3D printing is a good option because this joint is probably the most complicated in the human body. Previous temporomandibular joint implants have had high complication rates, and it’s hoped that the precise fit of these new implants will reduce complications.

Of course, it’s best to avoid surgery for your temporomandibular joint, if possible. Who really wants a 5-hour surgery? The good news is that it’s often possible.

If you start to notice TMJ symptoms, it’s best to get them treated early. This will reduce the stress on your jaw joint and head off debilitating injuries that require complex surgical repair.

If you want to learn more about nonsurgical, drug-free TMJ treatment in Sydney, please call (02) 9686 7375 for an appointment with a TMJ dentist at My Hills Dentist.