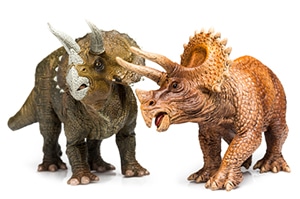 This week, Jurassic World stayed at the top of the box office, despite strong competition from a pair of children’s movies (Minions and Inside Out). Although in the movie, we marveled at the teeth of predatory dinosaurs like the raptors and the newly engineered Indominus rex, in real paleontology we have recently learned that it’s some of the plant eaters whose teeth are particularly noteworthy. A recent study found that Triceratops teeth were the most complex teeth ever studied.

The Most Complex Teeth Ever

Most dinosaurs, especially primitive dinosaurs like the long-necked sauropods, had disposable teeth. These dinosaurs had so many teeth that they were constantly pushing out new ones as old teeth became damaged or worn. As a result, it was assumed that dinosaurs tended to have very simple teeth, like crocodiles, but now researchers know that wasn’t always the case.

Most reptiles, like crocodiles, have teeth with just two layers. Humans and many other mammals have teeth with three layers. Herbivorous grazing mammals like sheep and horses have four layers in their teeth. But Triceratops, apparently, had teeth with five layers.

The basic strategy for Triceratops was similar to that of sheep. The hard structures in grass, called phytoliths, wore down the enamel of the tooth, exposing the softer dentin underneath. But Triceratops had a special kind of dentin that had blood vessels in it, called vasodentine. This layer of teeth was both hard and porous, so that as it wore away, it created a valley that was scalloped and grooved. Researchers said this structure allows the tooth to be strong, sharp, and light, similar to the design of some advanced kitchen knives or the blood groove found on swords.

Researchers claim that it was this efficient tooth structure that helped Triceratops and its relatives become one of the most successful dinosaurs ever, with a confirmed range that included Asia–where they first evolved, North America, South America, and, recently confirmed, Australia. The suspected ulna (front leg bone) was found near Melbourne, and confirmed last year as Serendipaceratops arthurcclarkei (a name that lends validity to the rationale for naming the I. rex) , similar in anatomy to the North American Leptoceratops.

Your Teeth Are the Key to Success

Dinosaur and sheep teeth may have been designed to wear down, but yours weren’t. If you have noticed significant or uneven wear on your teeth, it may be due to TMJ or other bite problems. TMJ can also lead to painful symptoms like headaches and jaw pain.

Instead of worn teeth, you can be more successful with beautiful, long, straight teeth. If this doesn’t describe your smile, cosmetic dentistry can help.

To have your bite and smile evaluated, please call (02) 9686 7375 for an appointment with a Sydney TMJ dentist at My HIlls Dentist in Baulkham Hills.