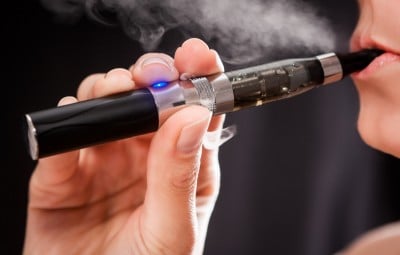 Controversy over e-cigarette safety and their effectiveness as a stop-smoking aid continues, with e-cigarette manufacturers floating stories that a potential nationwide ban of smoking is being considered, and that’s why the safety is being researched by government-funded labs. These articles used to be very marginal, but recently they made the Sydney Morning Herald, prompting a rebuttal by researchers at the University of Queensland.

Obviously, these types of marketing tactics overshadow the very real and very important question of whether e-cigarettes are safer than traditional cigarettes.

One component of this is whether e-cigarettes, like traditional cigarettes, will lead to dental implant failure. We don’t know the answer to this question yet, but looking at existing research gives us some clues.

How Smoking Leads to Implant Failure

Smoking causes dental implant failure directly by causing the body to create fibrous tissues instead of bone tissue around the dental implant root. The mechanism is poorly understood, but it didn’t seem to be related to nicotine. However, very recent research suggests that nicotine may inhibit differentiation of stem cells into bone cells.

What This Means for E-Cigarette Safety

E-cigarettes work by vaporizing a liquid that contains some largely inert compounds, flavoring, and nicotine. Although e-cigarettes don’t expose you to the thousands of chemicals found in cigarettes, they do expose you to nicotine, along with small amounts of heavy metals (which are likely not toxic in these amounts).

As a result, it’s possible that e-cigarettes might not have as negative effect on dental implants, but we’re not sure. We will have to wait for more detailed studies before we can make a determination. The good news is, once we know the effects of e-cigarettes, it’ll be easier to narrow down the cause-effect relationship.

The Best Move Is to Quit

If you’re looking for a way to preserve your nicotine habit despite increasing evidence of its harmfulness, it’s time to stop and admit that your best bet to preserve your general health and the health of your teeth is to quit.

After quitting, you will experience better oral health and better outcomes.

If you want help with treatment for periodontal disease or dental implants, please contact My Hills Dentist in the Baulkham Hills area of Sydney.