Australia Boasts Largest Dinosaur Footprint — But What About Teeth?

If you happened to walk along a specific 25 kilometre beach on the Dampier Peninsula in Western Australia during high tide, it would look like any other coastline. But revisit that same beach at low tide, and you would find a wealth of evolutionary history preserved in the stone beneath your feet: Thousands of dinosaur footprints, dating back around 130 million years.

Although researchers have been studying the area for years now, the true significance of the footprints preserved there was only recently announced. As it turns out, Australia’s beaches were hiding a dinosaur discovery that would break worldwide records. 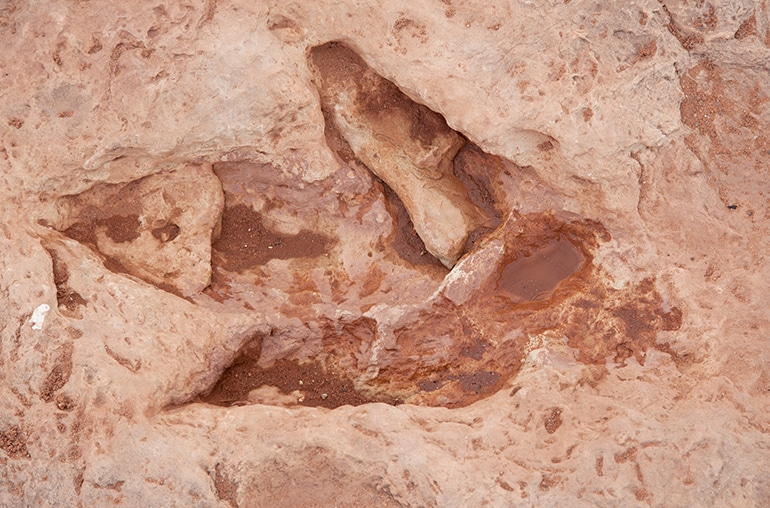 The 21 different types of dinosaur tracks identified at the Dampier Peninsula make up one of the most diverse collections of dinosaur footprints in the world. This discovery has not only become the primary record of land-dwelling dinosaurs in Western Australia (and the only record of Australian dinosaurs during the first half of the early cretaceous period), but it holds global significance, too: The largest dinosaur footprint ever found.

This track, measuring approximately 1.75 metres in length, tops the 1.15 metre track found in Bolivia last July, which previously held the record. The Australian footprint is believed to have come from a giant sauropod. This suborder of long-necked herbivores includes popularly known dinosaurs like brachiosaurus and brontosaurus.

But What About Their Teeth?

Of course, here at the dentist’s office, we have one-track minds — what about the teeth? Unfortunately, despite their massive foot size, sauropods do not have particularly impressive teeth when it comes to length. Their long necks resulted in tiny heads so as to keep their center of gravity low. Most sauropod teeth measure just a few centimeters. What is impressive about sauropod teeth, however, is their replacement rate: Some sauropods replaced their teeth as often as every two weeks!

When it comes to gigantic teeth, no other land-dwelling species can touch the formidable Tyrannosaurus rex. This massive carnivore could measure more than 12 metres long, and weigh over 8,000 kilograms. A long, heavy tail counterbalanced the weight of the giant head, which sported serrated teeth as large as 30 centimeters long. These massive teeth have been found at dig sites all over North America.

But while Australia doesn’t have 30-centimeter Tyrannosaurus rex teeth buried in the ground, we do still have some impressive prehistoric pearly whites. The major difference is that the 30-centimeter ancient teeth found in Australia don’t belong to land-dwelling dinosaurs, but to early ancestors of modern day sperm whales known as Livyatan melvillei. These teeth are much larger than modern sperm whale teeth researchers believe that’s because the ancient sperm whales ate prey with skeletons (like other whales!) while modern sperm whales eat soft prey (squid).


These teeth can tell us a lot about the dinosaurs that used them, from diet to the overall size of the creature’s skull. The size of the teeth isn’t the only factor that informs paleontologists about dinosaur lifestyles and biology — the texture, shape, and even wear patterns also hold important information for researchers.

Your teeth may not be 30 centimeters long and capable of taking down an apatosaurus for dinner, but we would still love to take a look at them! If you’re looking for an experienced dentist in Baulkham Hills, call (02) 9686-7375 or contact us online to make an appointment.