People often speak as if the ultimate dental technology would be the ability to regrow a lost tooth. Although this is an exciting prospect (and even more exciting that it might be less than 10 years away), there’s actually many ways in which dental implants might be better than regrowing lost teeth. 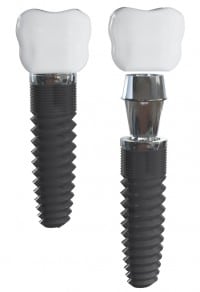 A lot of researchers look at animal models for regrowing teeth. The most common examples are alligators, crocodiles, and sharks. But there’s lots of reasons why following the path of these animals might be more trouble than it’s worth.

First, it’s important to be aware that the teeth of these animals are designed to be lost. In fact, they lose them on a daily basis, partly because they don’t really have much of a root. Imagine losing teeth all the time. Even if it’s more like losing milk teeth than permanent teeth, it still doesn’t seem like a fun time. And imagine how many of them you might have just lying around the house to be swept up all the time.

When researchers talk about regenerating human teeth, they look at a few models of animals that naturally regrow their own teeth. Alligators and sharks are two of the most commonly referenced animals.

And another thing. Sharks at least try to make the replacement process as efficient as possible by having rows of teeth waiting to move up when a front one is lost. Imagine what it would feel like having all those rows of extra teeth behind the front.

And with all these teeth being lost and replaced, there’s pretty much no way that orthodontics could possibly keep up to keep your smile straight.

A Lifetime of Waiting

Another potential problem with regrowing your own teeth is that they’d likely take forever to grow. Some of your permanent adult teeth begin growing in the womb, taking eight or nine years to reach maturity.

Even at its longest, the dental implant process is typically complete within a year. That’s a heck of a lot more reasonable!

Although dental implants aren’t quite like your natural teeth, they are close. They’re attractive, strong, long-lasting, and fully functional.

If you would like to learn more about these highly effective tooth replacement options, please call (02) 9686 7375 for an appointment with a Sydney implant dentist at My Hills Dentist in Baulkham Hills.